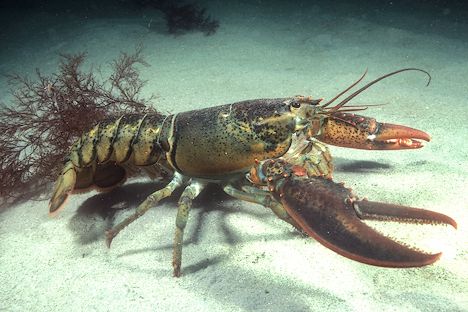 There is some very good news. Following the Birch report

the government will be supporting an amendment to the  Animal Welfare Sentience Bill  recognising the sentience of decapod crustaceans and cephalopods.. See

This is a major step forward. However, if you look at the government website above, you will see that they are not going to change any regulations about the treatment of these animals, at least not initially. I think the implication is that future regulations may be influenced  by the Animal Sentience Committee at a later date.
Despite the lack of immediate legislative action to regulate the treatment of decapod crustaceans and cephalopods , this is a huge step forward. Moreover, it will encourage all members of the shellfish industry to take the welfare of these creatures into account..

Thank you to all of you who have supported this campaign over the many years it has been running.

Kind regards to all,


PLEASE TAKE ACTION NOW!
PLEASE WRITE TO YOUR MP AND TO LORD ZAC GOLDSMITH (WHO IS STEERING THE ANIMAL WELFARE (SENTIENCE)  BILL)  TO ASK FOR THE LSE REPORT INTO THE SENTIENCE OF DECAPOD CRUSTACEANS AND CEPHALOPODS TO BE PUBLISHED IMMEDIATELY AND FOR THE WELFARE OF  THESE ANIMALS TO BE PROTECTED BY THE  BILL. FEEL FREE TO MENTION THE POINTS MADE BELOW AND YOUR OWN. PLEASE FORWARD ON SOCIAL MEDIA, TO FRIENDS ETC.
FIND YOUR MP HERE
https://members.parliament.uk/members/Commons
Don’t forget to put your address at the top of the email
CONTACT LORD ZAC GOLDSMITH HERE
contactholmember@parliament.uk
(If you address the email to Lord Goldsmith, H of L staff will send it on)

THE PRESENT SITUATION
As you will know, for quite some considerable time, the government has been promising to introduce an Animal Sentience bill to replace the EU’s Article 13 which recognises animals as sentient beings.  Last year, as a result of lobbying from you and many others like you, the government commissioned an LSE study into the sentience of decapod crustaceans and cephalopods in preparation for the publication of the bill. The report was completed late last year and handed to the government for peer review followed by an internal review by chief veterinary officers, ministers, etc. However, the report and the results of these deliberations have yet to see the light of day. Meanwhile the Animal Welfare (Sentience) Bill was published in May. This only recognised the sentience of vertebrate animals. Victoria Prentis, Parliamentary Under-secretary of State for Environment, Food and Rural Affairs has stated that the Government has the power to include decapod crustaceans and cephalopods in the bill through secondary legislation, should scientific evidence support it. She has said that the independent review into whether decapod crustaceans and cephalopods can be considered sentient “will report shortly”.
Why has it taken so long to review the LSE study? The contract for this was awarded in August 2020. So the review of the study has actually taken longer than the study itself.
While the Shellfish Network has been content for the study and the review process to be gone through to satisfy any doubters, we do not think that this was necessary.
1) All animals are sentient according to the dictionary definition
2) It is obvious through simple observation, even to a child of three, that these animals react to painful and other stimuli. Indeed other countries such as New Zealand and Norway, not to mention the EU, regard this to be an obvious fact. No animal, including humans, needs to have superior cognitive abilities to experience pain. When a human experiences a painful stimulus, s/he does not need to think about it to know that it is painful
3) If this were not enough, there has been a huge amount of research confirming this obvious fact. There is far too much of this to list here, but one important study is by Professor Robert Elwood. See https://shellfishnetwork.weebly.com/more-scientific-evidence.html
4)  If this were not enough, The British Veterinary Association and numerous other UK experts have recognised that these animals are sentient.
While we hope that all this will be resolved, and that secondary legislation will be passed to confirm that decapod crustaceans and cephalopods are sentient, time is now short. The bill is already passing through Parliament. So please take action now! Thanks!
Kind regards, Peter (for The Shellfish Network)
​

AAA
AAA
PLEASE SIGN OUR PETITION. THANKS . YOU WILL BE SENT REGULAR UPDATES ABOUT OUR CAMPAIGN
PLEASE CLICK, OR COPY AND PASTE
https://you.38degrees.org.uk/petitions/give-legal-protection-against-cruelty-to-crustaceans
t
SUCCESSES SO FAR
The extension of the protections of the  Animal Welfare Act to crustaceans became one of the British Green Party's manifesto pledges in 2015. This was repeated in their 2017 manifesto. Individual politicians in the major parties starting to support a change in the law.
Widespread publicity in a number of high circulation newspapers, as well as celebrity endorsements for the humane treatment of shellfish. Mainstream animal charities supporting a change in the law.
​

The shadow Defra minister, Sue Hayman, has said she is 'keen' to look into t
he issue of extending the protections of the Animal Welfare Act to crustaceans. Of course, there is a long way to go before this is accepted as Labour party policy but it seems promising. c
You may also wish to email Michael Gove.: michael.gove.mp@parliament.uk
Make it clear at the top of the page  you are emailing him as the Defra minister (not as a constituency MP) . Suggest to him that it is only logical, as he has admitted that animals are sentient, that he use his powers to extend the Animal Welfare Act to protect crustaceans like crabs and lobsters.

You might be interested in our letter printed in The Independent: 'Is Michael Gove Sentient?'
See:  http://www.independent.co.uk/voices/letters/future-generations-cut-down-indulgences-luxuries-brexit-choices-michael-gove-sentient-crabs-lobsters-a8074201.html

Wonderful News! Labour has followed the Greens and now supports the legal  protection of decapod crustaceans and cephalopods in their Animal Welfare Plan. Thank you to all those who wrote to Sue Hayman (shadow Defra minister) during the election and subsequently about this issue.

27.2.18 More good news, probably. Tim Farron has written to me to say that the Lib Dems are likely to support the legal protection of decapods and cephalopods, although they would need to look at the wording of the bill.
MP members of the Conservative Animal Welfare Foundation believe that decapod crustaceans should be legally protected.

April 2018: A shop -Fine Food Specialist - in Covent Garden is using Amazon to advertise. It is sending out lobsters to customers 'by courier' with their claws tied, out of water, in small containers. The animals can be in transit in these conditions for long periods of time. The Welfare of Animals (Transport) (England) Order 2006 gives invertebrates some protection from cruelty.
The Shellfish Network is  pursuing this issue with Wandsworth, which is the responsible local authority. Feel free to contact the shop and Wandsworth to make your views known.
​
May 31st: New study done by Joseph Poore of Oxford University shows that farming crustaceans makes the second largest contribution to greenhouse gas emissions of any farming method. See
https://www.theguardian.com/environment/2018/may/31/avoiding-meat-and-dairy-is-single-biggest-way-to-reduce-your-impact-on-earth
September 2018 Update:
With the help of our our legal advisor we are  continuing to get more information about Fine Food Specialist with a view to taking legal or other action. We are also asking the Royal Mail to stop transporting live crustaceans. Please write to the Royal Mail about your concerns re this cruel practice.
The Animal Welfare (Sentencing and Recognition of Sentience) Bill has been held up because of all the complications of Brexit and because the bill was badly drafted. This is unfortunate as an MP has agreed, subject to certain caveats, to put forward an amendment to the bill with a view to recognising decapod crustaceans and cephalopods as sentient There is considerable Parliamentary support for this.

November 2018  After a considerable amount of correspondence,  DPD, the mailing company, have pledged not to transport live lobsters anywhere in the UK. This is a considerable step forward for which  we would like to thank the DPD management   This is a major victory for compassion over cruelty.
December 2018: More information uncovered about Fine Food Specialist and Wandsworth Council. We hope to make this public before too long, subject to legal constraints . Because of the Brexit confusion, no news about the Animal Welfare Bill.
May 2019 Cocaine  found in shrimps in UK waters! :  sorry to disappoint any carnvores reading this  but the shrimps also contained dangerous pesticides and pharmaceuticals. This is yet another reason for not eating these creatures. They absorb many of the toxins found in the sea and in rivers.
​July 2019: took part in Agroecology meeting at the House of Commons on Monday 1st. Talked to Kerry McCarthy MP afterwards. She says that when the Sentience Bill reappears she will table an amendment to extend legal protection to decapod crustaceans. I suggested that she co table the amendment with a Conservative to get maximum support.
January 2020 The state of the parties: the Green Party and Labour Party both support legal protection against cruelty to decapod crustaceans. There are a large number of MPs in other parties which also support this view
January 2020: Wuhan virus: yet again a deadly virus has emerged through the cruel treatment of animals. This virus emerged in a Chinese market where dead and living animals were being bought and sold in close proximity to each other. When will we learn that cruelty to animals leads to severe harm to ourselves.
MARCH 2020

There will be a debate in Westminster Hall, Houses of Parliament on Animal Sentience on March 16th. Please encourage your MP to attend. The sentience of decapod crustaceans and cephalopods will be raised.
In other news the government is asking for researchers to apply for a contract to look into the sentience of these creatures. Is it at last getting serious about this issue?

September 2020: The debate in March in Westminster Hall mentioned the Shellfish Network. Kerry McCarthy MP discussed the issue of legal protection for decapod crustaceans and cephalopods. The junior minister present told the chamber that the question of animal sentience would be addressed but appeared to push the issue towards the end of this year at the earliest. Kerry McCarthy voiced her concern about this. In the meantime, the government has followed through with its promise to employ a research team to investigate what the evidence is for the view that decapod crustaceans and cephalopods are able to experience pain.
January 2021: Brexit reduces the export of shellfish to Europe. It is an ill wind that blows nobody any good!


PLEASE TAKE ACTION NOW!
PLEASE WRITE TO YOUR MP AND TO LORD ZAC GOLDSMITH (WHO IS STEERING THE ANIMAL WELFARE (SENTIENCE)  BILL)  TO ASK FOR THE LSE REPORT INTO THE SENTIENCE OF DECAPOD CRUSTACEANS AND CEPHALOPODS TO BE PUBLISHED IMMEDIATELY AND FOR THE WELFARE OF  THESE ANIMALS TO BE PROTECTED BY THE  BILL. FEEL FREE TO MENTION THE POINTS MADE BELOW AN